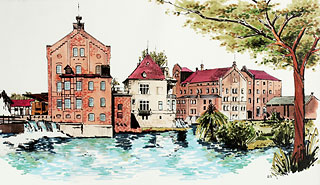 The Erprath mills were first historically named in 1166. In 1909, the facilities were expanded with the help of steam engines to become the most modern mill in the Lower Rhine region. In 1953, the production of breadcrumbs began under the name BRATA. Behind the old walls of the Erprath mills is one of the most modern plants for the production of breadcrumbs and breadcrumbs. It is precisely this combination of old and new that is regarded by BRATA and all its employees as a symbol of reliable constancy in the face of change.

Our two production sites are located in Neuss and Nettetal.